The Republic of Gabon’s 12th Shallow and Deep Water Licensing Round opened on 7th November 2018. The acreage on offer included 12 shallow water and 23 deep-water blocks. Oil and gas companies were invited to submit tenders to obtain exploration licenses within their chosen blocks. The round closed on 30th June 2021.

On June 30, 2021, the Gabonese State closed the submission of tenders for participation in the 12th call for tenders for the allocation of thirty-five (35) oil blocks from its sedimentary basin. To this end, after examination and evaluation of the offers made on September 28 and 29, 2021 in Libreville, the oil companies selected will be invited to proceed with negotiations.

The final stage of the Gabon 12th Licensing round roadshow has been confirmed, taking place at the Hilton, University of Houston,  Texas on 28th June 2021.

Attendees are invited to meet with representatives from the Houston Mayor’s Office of Trade and International Affairs before listening to a series of talks concerning the logistics and opportunities associated with Gabon’s 12th Offshore Licensing Round.

The event will take place between 10am and 2pm and will include lunch.

We look forward to your presence at this final roadshow event. 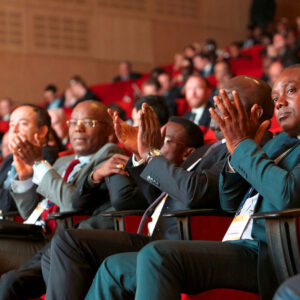 On April 23, 2020, the Gabonese State postponed indefinitely the date of closing of the submission of tenders for participation in the 12th Call for Bids due to the COVID-19 pandemic.

However, on 14th May 2021, the Minister of Petroleum, Gas and Mining indicated that due to the progress made with regard to sanitary conditions towards recovery to normal activities, the new closing date of the submission of tenders is set for June 30, 2021.

The Minister invited petroleum companies interested in the acquisition of the 35 blocks identified within the framework of the 12th call for tenders to submit their offers according to the terms defined on this website.

The Gabonese State launched on November 7, 2018 in Cape Town, South Africa, the 12th licensing round for the allocation of thirty-five (35) oil blocks from its sedimentary basin.

The deadline for submission of tenders was set for April 30, 2020. However, the development of this event is confronted with the current global health crisis linked to the COVID-19 pandemic. In addition, as in other countries, Gabon has taken containment measures to combat the spread of COVID-19.

In view of the above, His Excellency, Vincent de Paul MASSASSA, Minister of Oil, Gas, Hydrocarbons and Mines informs all national and international oil companies that the closing date for the submission of tenders has been postponed to a later date.

The government of the Gabonese Republic will communicate on the new date when the sanitary conditions are restored to normal.

25th February 2020: New Minister to Present at Roadshows in Houston and London

His Excellency Vincent de Paul MASSASSA, Minister of Oil, Gas, Hydrocarbons and Mines of the Republic of Gabon was appointed on 2nd of December 2019. This week he will be presenting “Gabon Oil and Gas investment opportunities in the light of the 12th offshore License Round launched under the new Hydrocarbons Code of Gabon approved in 2019”.

The Minister will take part in the University of Houston Conference, on 25th-26th of February 2020 and the APPEX Event in London on Wednesday 4th of March, 2020.

Minister Vincent de Paul MASSASSA holds an Engineering Degree obtained in the United States at New Mexico Institute of Mining and Technology; He has served in the Gabonese Government since 1999, being Director of Exploration at the DGH in 2005, Director of Operations in 2006, and Attaché to the office of the Minister of Petroleum in 2014 where he was Advisor to the Presidency of the Republic on Mines, Industry and Hydrocarbons.

Before serving at the Government, he developed an extensive career in the private sector in technical positions at Tenneco Oil, British Gas, Perenco and Shell Gabon.

His Excellence Vincent de Paul MASSASSA, The Minster of Oil, Gas, Hydrocarbons and Mines has today released the final versions of the Tender Specifications and the updated version of the Bidding Criteria:

Please note that all official documents are in French. Documents in English are for information only.

01 October 2019: Latest Developments on Fiscal Terms and Bidding Criteria at the The 18th PESGB / HGS Conference on African E&P

H.E Noël MBOUMBA, Minister of Oil and Hydrocarbons, attended the 18th PESGB/HGS Conference on African E&P. The Minister held a talk on the Latest Developments on Fiscal Terms and Bidding Criteria for Gabon’s 12th Offshore Licensing Round.

To download a copy of the presentation given by Pierre ABESSOLE OLLOMO, Geologist and Duplex YOCKOT, Economist. Please click here.

Gabon’s new Hydrocarbons Law was officially published by the Government in its  ”Journal Officiel n°28” on 22nd July 2019. Use the link provided to download this document (in French).

Download a detailed listing of blocks on offer in the 12th Round and the data available.